Have you had your fail today? 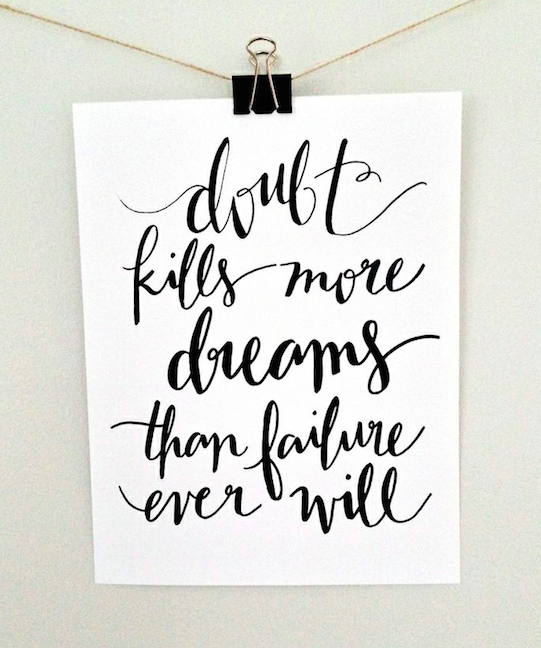 Believe it or not, October 13 is the International Day For Failure. And while it may not be as fun as International Grilled Cheese Day or International Dress Your Dog Like a Star Wars Character Day, it’s a lot more gratifying. (Yes, even if putting avocado on a grilled cheese sammie is ah-MAZ-ing.)

We make light about #fail like it’s no big thing, but when we’re all alone with our inner Mean Girl, the chatter is often a lot more catty. It’s hard to face a failure, and it can be
even harder to move forward when we feel like we made an irreparable error. And if negative self-talk runs on autopilot, we run the risk of feeling like a big mess of fail all the time. It’s exhausting. And it, well, sets us up for failure.

The fear of the f-word is what keeps us stuck, but it’s the being stagnant part that actually causes trouble. Because let’s be honest, how many times has something that you’ve perceived as a failure actually ruined your life? It may have been a roadblock – but it probably also lit a fire under you to keep going.

The failure is not the problem – it’s the power we give it.

And we also have the power to turn it around.

Give it some perspective. Most of the time, other people are not paying nearly as much attention as we think. They’re so absorbed in taking their own risks that there’s not enough brain space to keep tabs on yours. Let that reminder take a little pressure off.

Give yourself a break. Because sometimes there will be fails for the whole world to see see – or your colleagues, or your family; which, when you’re feeling like a failure feels an awful lot like the whole world.

Give it another go. When we fail at something, it’s actually good practice; it builds up our resiliency and makes us better able to bounce back when we inevitably face a future setback. And that’s not something to be bummed about; it’s actually pretty empowering. Look at it this way: the more often you try, you actually improve your odds of success.

Give it a lesson. I recently gave myself this challenge: what if I welcome the lesson? What if I go into the potential fail, whatever it is, with only the expectation of an experience? Because whether I succeed or fail, it’s better than doing nothing. And it releases the need to control.

So today I’m going to embrace the fail. I’m even going to give it a little gratitude, because without it I wouldn’t be able to appreciate everything that’s going right. The good stuff isn’t dumb luck.

What would you do, if you weren’t afraid to fail?
Photo credit

This site uses Akismet to reduce spam. Learn how your comment data is processed.